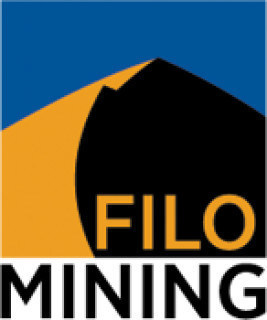 Mr. Beck has over 15 years of international project management and corporate development experience, with expertise in project development and engineering, corporate strategy, acquisitions, divestments, and joint ventures. He is a registered Professional Engineer in the province of Ontario, holds a Bachelor of Applied Science from Queen's University, as well as an MBA from the University of British Columbia.

For more than a decade Jamie has successfully held positions of increasing responsibility with various Lundin Group companies.  In 2009 Jamie began in Corporate Development with Lundin Mining Corp. and was soon seconded by Josemaria Resources Inc. (formerly NGEx Resources Inc.).  In 2016, following the spin out of Josemaria's Filo del Sol project into its own publicly traded entity, Filo Mining Corp., Jamie continued his role in both companies.  In 2017, Jamie was appointed as Vice President, Corporate Development and Projects of Filo Mining Corp.

"I am excited to announce the appointment of Jamie as the Company's new President.  Jamie has played a key role for the Lundin Group for over a decade and has been integral in the success of the Company and in the advancement of the Filo del Sol Project." Commented Lukas Lundin, the Company's Chairman.

"As announced in early August of this year, the Company is embarking on an extensive drill program for the upcoming 2019/2020 field season, commencing in November, where we are planning an extensive diamond drill program and a full 3D IP geophysical survey.  This year's program will build on the successes of last year's season, where results indicated the potential to extend the depth and strike length of the Filo deposit and mineralization.  Jamie as President further strengthens the management team and will allow us to continue to deliver value for all our stakeholders".

This information was submitted for publication, through the agency of the contact person set out below, on September 16, 2019 at 2:00 a.m. Toronto Time.

Lukas Lundin, Chairman of the Board
Filo Mining Corp.

Neither the TSX-V nor its Regulation Services Provider (as that term is defined in the policies of the TSX-V) accepts responsibility for the adequacy or accuracy of this news release. 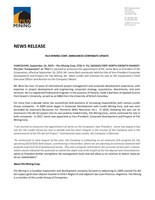